About the Author, 'Earth Child' 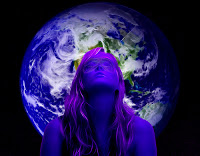 Dar Cavallara 'Earth Child' began her journey into sustainable living in 1997 when she was traveling through Colorado and met the late Glen Harcourt of Steeprock Jointery.  Glen was pioneering alternative building/fuels and had established an artisans guild style EcoVillage for apprentices on his red-rock cliff-side land.  The inspiration Glen ignited in her was the beginning of a tour through the western US of living and working at various developing EcoVillages and sustainable communities.

In the year 2000 she founded a nomadic non-denominational 'ecoministry' that operated on the Mayan calendar and whose mission was "to offer charitable services that educate, assist, network and facilitate the healing of the Earth and her children." It was during this time that the Earth Charter Initiative was launched and after endorsing the charter the ecoministry became a networking vehicle for the Earth Charter.

Returning to college to finish her communication studies degree opened up opportunities to give speeches and presentations about the Earth Charter.  She was also active in the Earth Charter Youth Initiative and Earth Scouts - always playing advocate and facilitator roles.

In 2006 she founded SeThInk Media, a digital publishing company, and launched the Interdependent Project - The Sustainability Matrix.  Her experiences with the Earth Charter during the past 6 years will be shared on this site and her intent is to ensure that by 2020 the Earth Charter's presence in the world is vibrant and alive for the next generations benefit.  This site is authored primarily by 'Earth Child' (aka Dar).

The purpose of this site is to share valuable experiential knowledge and resources related to the Earth Charter as a living people's document and the myriad challenges that the 'official' Earth Charter Initiative faces in its own evolutionary process.  It is the sincere intention of the author to have this work and effort lead to a healthy Declaration of Interdependence and Interdependent Partnerships manifest between people everywhere who have endorsed the Earth Charter.

Read more 'about' in this first article when this site was launched...